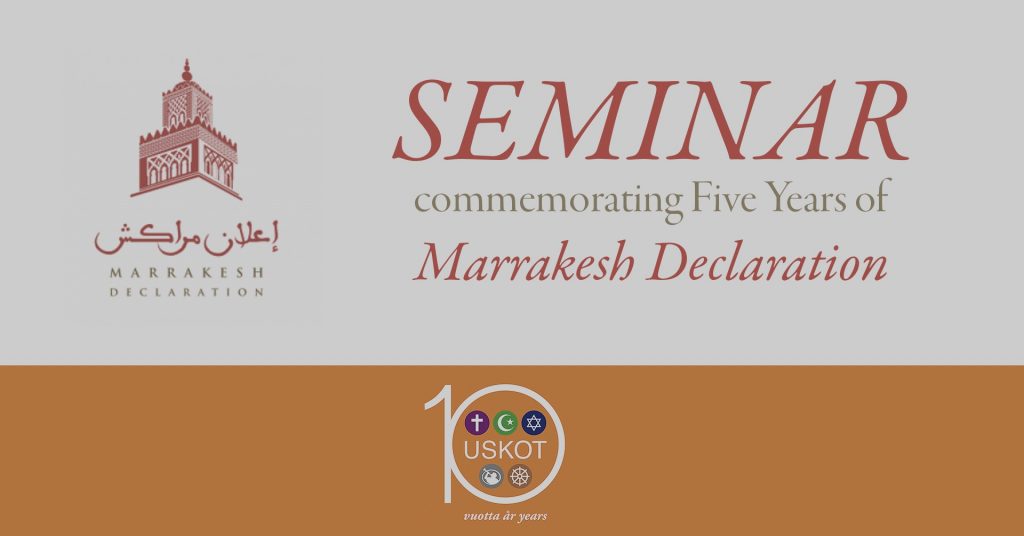 The National Forum for Cooperation of Religions in Finland (CORE Forum) will organize on September 14, 2021 at 9.00 AM – 11.00 AM, a seminar commemorating the January 2016 Marrakesh Declaration on the Rights of Religious Minorities in Predominantly Muslim Majority Communities. The event, will take place in Helsinki online and will be attended by senior religious personalities and representatives of various ministries and organizations.

The Marrakesh Declaration was issued in January 2016 at an international conference of Muslim leaders in Morocco. It was signed by some three hundred leaders of Muslim communities from 120 different countries. The Declaration aims at securing the rights of minorities and promoting peace in society. Drawing from the Islamic tradition, particularly the Charter of Medina, it establishes a link between Islamic values and international human rights documents such as the UN Charter and the Universal Declaration of Human Rights. It has also been compared to the OSCE 1975 Helsinki Final Act, which remains one of the OSCE’s cornerstones.

To honor the 70th anniversary of the Universal Declaration of Human Rights, the CORE Forum decided in 2018 to publish the Marrakesh Declaration in the Finnish language. With this seminar, we aim to increase the Finnish public’s awareness about the fact that the great majority of Muslims do not see a contradiction between the Islamic world view and the values reflected in the Universal Declaration of Human Rights. Furthermore, the similarity in content with the 1975 Helsinki Final Act establishes a link with Finland’s peacebuilding role, allowing the use of the Marrakesh Declaration as a tool in discussions about religions and value systems in Finnish society.

The seminar will be conducted online in English. Everyone can follow a live stream of the seminar on the CORE Forum’s YouTube channel.

Speakers of the Seminar:

H.E. Mr. Mohamed Achgalou, Ambassador of the Kingdom of Morocco