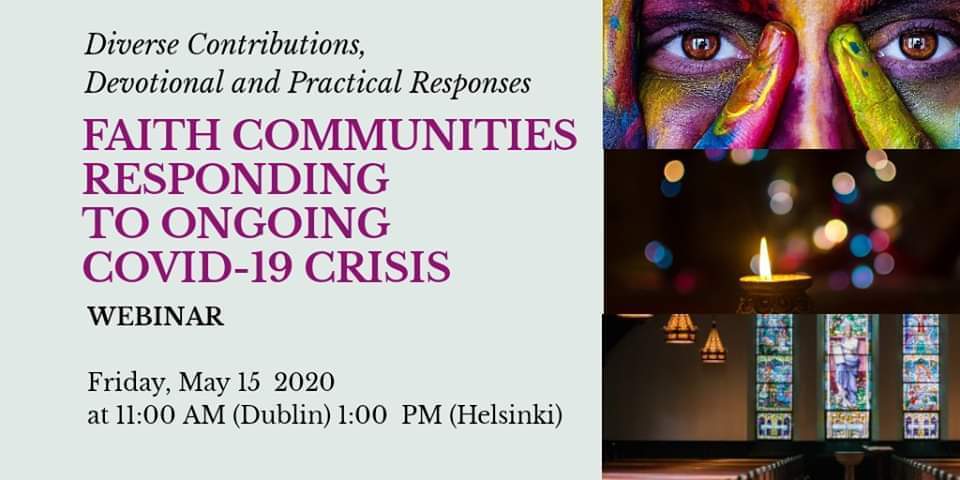 ”I am the Executive Director for an organization called the CORE Forum, which is  short for “The National Forum for Cooperation of Religions in Finland”. Our member organizations represent Judaism, Christianity and Islam. We are not a faith-based community, rather we are an NGO. Our purpose is to foster peace and harmony in society by promoting interfaith dialogue and mutual respect.

In other words, this means we don`t practice or manifest any religion together, but because of our close cooperation we share a lot of knowledge about how each of our religious faith-based communities are managing in these difficult times and about the challenges they have been facing during the past weeks.

Of course, because of state regulations, all physical meetings and religious events have been cancelled. Our first reaction to these exceptional circumstances was to strengthen our mutual communication, both internal and external.

Here are some examples of what we have done in practice: various authorities, such as governmental ministries and health care institutions have asked us to share information with religious societies in many different languages, for example, Russian, Arabic, Somali, Afghan, Estonian, Chinese…  That was because of the strong trust the authorities have in religious leaders, knowing that their community members, in particular immigrants, listen to them attentively and with respect.

The governmental authorities wanted to collect information about the mental endurance of people in Finland during the corona-virus crisis, using a survey.We delivered the survey to our member communities  and collected data for the authorities.

Religious leaders had an immediate connection with each other  and thus were able to make a common statement  to comfort and encourage their people in the unsettling, uncertain situation

The statement was shared by the social media in many sites. We also wrote articles to the media dealing with the practices in the various religious communities. Some of these the media published.

We were invited to be one of the partners in the “Finland acts together” -campaign launched by Prime Minister’s Office, and we have also had active cooperation with other NGOs in the same field.

Communication has been fluent and effective because of the understanding built up between the religious communities in the CORE Forum during a period of over 10 years. This has resulted in a stable and strong basis for our cooperation. In this sudden, exceptional situation the patient spadework that has been done over the years has been rewarded by something real and visible.

Religious communities in Finland are very different in size.  The Jewish community consists of only 2000 people, while the number of Muslims is about 110 000 and Christians number almost 4 million.

Regardless of these size differences, in our common enterprise we all have equal rights with the same value as religions and dignity as persons.  There is however a big difference in organizational structures. The Evangelical Lutheran Church of Finland is very well-organized,  compared with some of the religious minority communities.  For example, all Islamic communities work mostly on a voluntary basis.  They are organized, but there is a lack of resources.

This is something that the authorities and other religions should also recognise, and ask the minorities’ perspectives directly from them.

Regarding the restrictions in practicing one’s religion because of the pandemic, as far as I know,  all the Finnish religious communities have made use of online possibilities,  giving spiritual and material help to people in need,  and have had meetings, services and events online.  Ramadan is spent rather normally, but no prayers or iftar dinners can be held physically together with anyone outside the family.

Finally, I’d like to highlight one concrete issue: this is the body washing rituals Jews and Muslims carry out before burials.  Despite the exceptional circumstances, this hasn’t been a problem for the Jewish communities, as they have their own washing rooms.  This facility is one that Muslims don’t have, and the instructions from the health care authorities have been unclear until now. This has been a big issue for Muslims.

A few days ago I heard that, fortunately,  some improvements have now been implemented and Muslims feel that their needs have been heard.

This exceptional time has really shown the power of inter-faith dialogue and co-operation. In a crisis, we can realize how similar we all really are as human beings, regardless of our different religions.  Such cooperation is an active and influential way to build peace.”